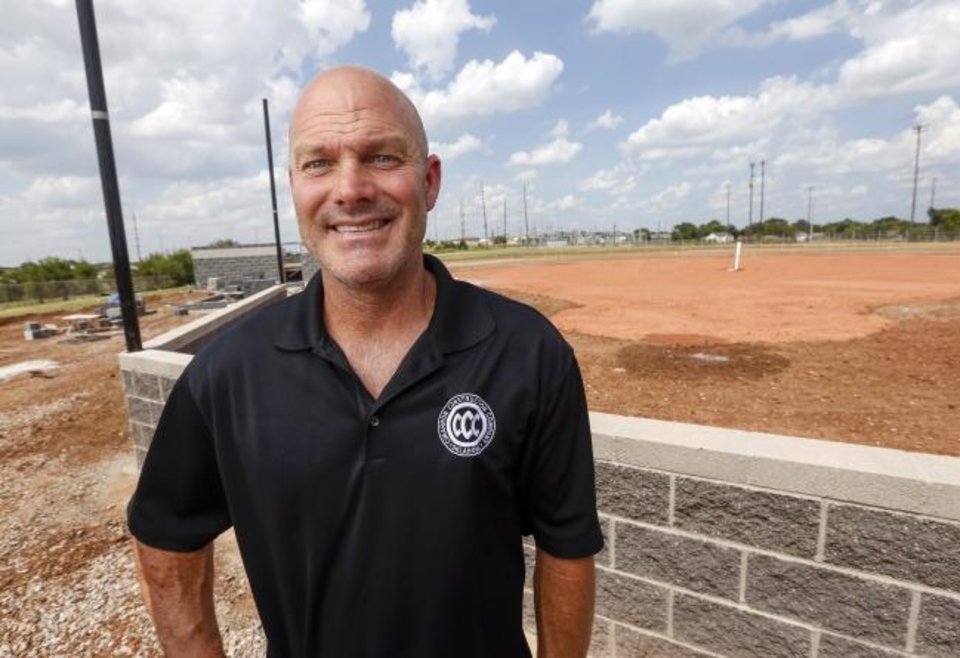 He’s a construction man who regularly wakes at 5 a.m. and heads to a site, hops on a tractor and gets dirty.

But as much as he prefers busy days to lazy ones, this summer has tested him.

“It’s a good thing I don’t have hair,” he said, laughing about his shaved-bald head.

Noble heads up construction for Fields & Futures, the nonprofit rebuilding athletic fields in Oklahoma City Public Schools. Over the past six years, he has overseen the completion of 22 fields. Three or four a year. This summer with the district’s Pathway to Greatness plan shuttering some schools and shuffling others, he is overseeing fields being built simultaneously at eight schools.

The plan will bring at least one new field to every relocated high school and middle school.

Even a busy body like Noble acknowledges the frantic pace.

But he isn’t complaining. Doing so many fields at once might not be what he originally signed on for when he joined forces back with longtime friend and Fields & Futures founder Tim McLaughlin, but he has seen what can happen when a school gets a new field.

He knows what is possible when kids get to play.

Sport actually brought Noble and McLaughlin together almost two decades ago when Noble decided to start a soccer team for his oldest son.

“Is there anyone at Pre-K who looks like they want to play soccer?” he asked his wife one day.

It wasn’t long before the families were spending hours at practice and games together. As their children grew, they added kids from all over the city to their travel teams. Noble remembers realizing players whose families made less money or whose neighborhoods had less means sometimes felt like they didn’t belong.

In the end, all the players got college scholarships, solidifying in Noble’s mind just how powerful an opportunity to play could be.

So when McLaughlin called in 2012 with the idea of rebuilding fields in OKCPS — it wasn’t even called Fields & Futures yet — Noble jumped in.

Jefferson Middle School on the city’s south side would be first. It badly needed a field for football and soccer. Noble had once upon a time built a soccer field on the acreage around McLaughlin’s house, so Noble figured he could almost handle the Jefferson build by himself.

But soon there were plans to do more.

“I ended up not leaving Jefferson until we had done the softball and baseball,” Noble said. “That kind of blossomed Fields & Futures.”

Noble talked with his brother — they own Cimarron Construction, the fifth generation of their family to be involved in the trade — and they decided business was good enough to make some significant commitments. Tommy would not only do Fields & Futures work full-time, but Cimarron would also do the builds for cost.

A job that would normally cost $2 million could instead be done for $700,000, huge for a nonprofit trying to stretch every donated dollar.

“They make nothing off of it,” McLaughlin said.

But to hear Tommy Noble tell it, the payout is immeasurable.

He remembers working at Roosevelt Middle School, just northeast of the airport. During recess, students would line the edge of the playground asphalt where the construction fence stood. They just wanted to watch Noble and his crews work.

“It was like they couldn’t believe we were there,” Noble said. “That starts to put into perspective — ‘Wow, they do need this.’

“They had never had (a game) at Roosevelt.”

But the first game, Noble was there.

Same for all the first games at all the new fields.

Noble knows his work with Fields & Futures won’t last forever. There will come a point when all the fields have been built, all the facilities have been completed. But even with this summer’s massive push — partners such as OG&E, CL Boyd, Grooms Irrigation, United Turf and Track and others have been invaluable — much work remains.

Softball and baseball fields at U.S. Grant are next on the to-do list, plus there will be additional builds at the new Pathway to Greatness high schools and middle schools.

“We just put one field at each place so they could start practice,” Noble said. “Then we’ll go back.”

Had it not rained so much in the spring and cost Noble and his crews nearly two months, he says they would’ve hit their original target dates for completion.

Still, what has been done is a marvel; when the school district first approached McLaughlin in the spring about making the Pathway to Greatness schools a priority, he figured it would take three years. When officials suggested being done this fall instead, McLaughlin knew there was a chance.

“None of this,” McLaughlin said, “would’ve happened without him.”