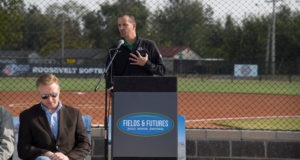 After the nonprofit organization Fields and Futures renovated her softball field, she didn’t want to leave. Her field has hosted the all-city softball tournament for three years.

Other community teams use the field as well.

“It’s been a game changer,” she said.

Oklahoma City Public Schools Director of Athletics Keith Sinor said Greear isn’t the only one who has stuck around when she could have retired. He said he’s had several coaches stay in the district because they want to work on their new fields.

“We noticed that when we put this concerted effort into not only providing our kids a great place to play, but a great place to coach on, it enthuses them and their jobs,” Sinor said. “It encourages them to stay around.”

He equated the change to being an owner versus renting. In the past, the coaches were looking for the next job. Now, they’re being more invested.

Greear’s field had a rusty fence with holes in the outfield. She said she had her girls put their ball bags around the fence so the balls wouldn’t roll out. For games, the team would have to go to a park near downtown, and the surrounding neighborhood never followed them to the games.

“It’s brought the community together,” she said.

Fields and Futures co-founder Tim McLaughlin said the organization is almost at its halfway point with the Oklahoma City schools’ fields.

There are 24 more fields to redo or build, with 20 already completed. The next project is an $800,000 complex at Southeast High School, where Fields and Futures will build softball, baseball, football, and soccer fields. The organization is still raising money for that project.

The attrition rate change is astonishing to McLaughlin.

“We haven’t even been to every complex yet,” he said. “There are more than 260 coaches. We look at them as life mentors to student-athletes. We have a huge focus on making sure we support the coaches.”

McLaughlin said every completed complex gives him energy to do more, but the organization can work only as the money is available. Grant money helps fund some projects as well.

“We just want to go as fast as we can,” he said. “You see the culture get a good boost. The kids are holding their heads up.”

And Sinor wants that work to continue quickly as well, because when his coaches stick around, the community is improved.

“It’s hard to build community when you only have that coach for a certain period of time,” he said. “If (the coaches) are willing to stay around, and the community buys into them, then the program grows as a result of that.”