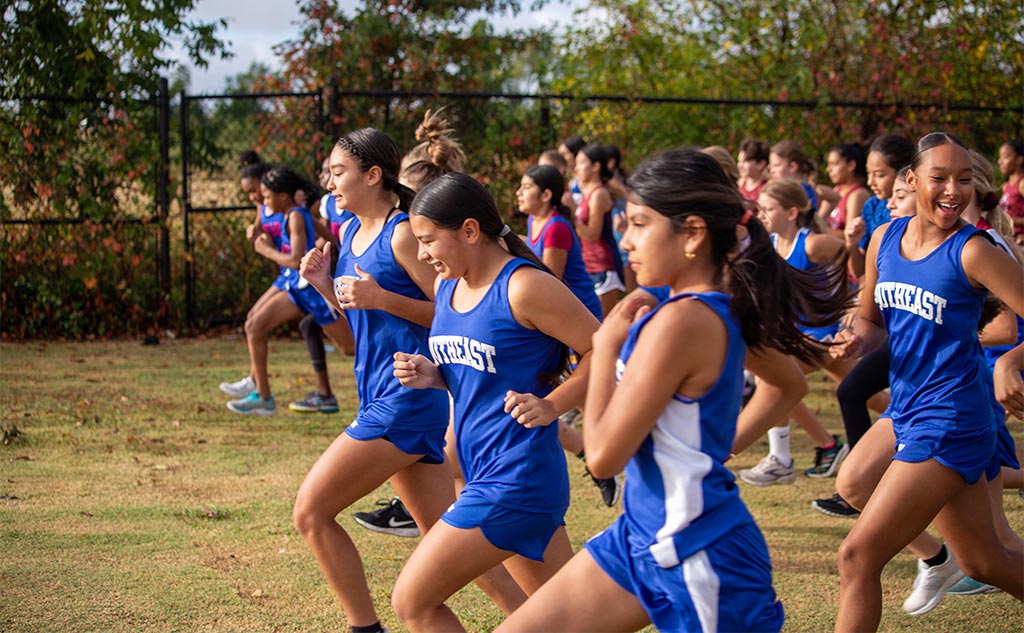 If you were asked to describe the perfect setting for the 2021 All-City Athletic Conference Middle School Cross Country Championship, you would be hard-pressed to paint a better picture than Webster Middle School on the morning of October 2, 2021.

With fall temperatures in the lower 70s, 112 boys and girls from nine OKCPS middle schools lined up to attack the fast, spectator-friendly course looping around Webster’s school grounds. 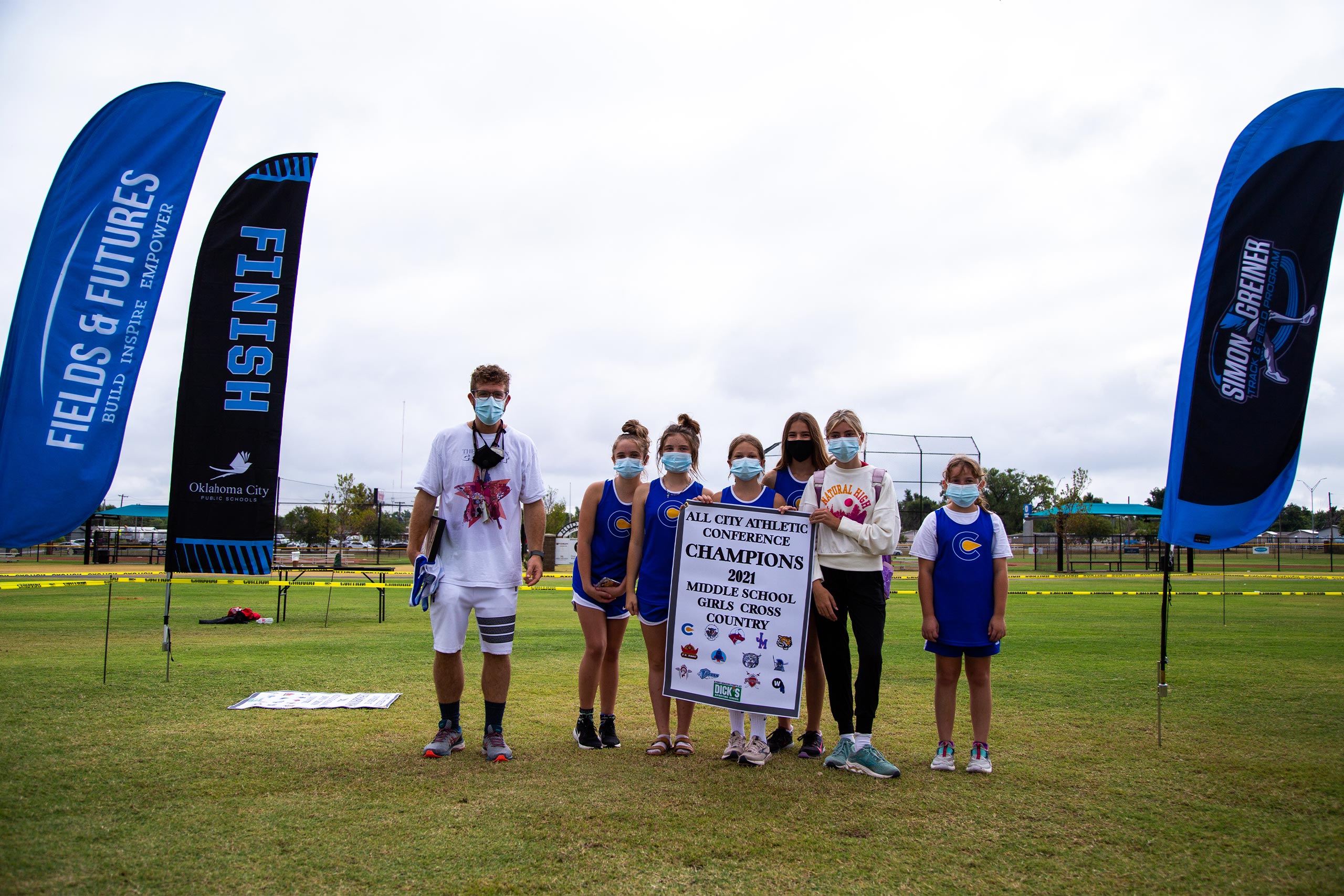 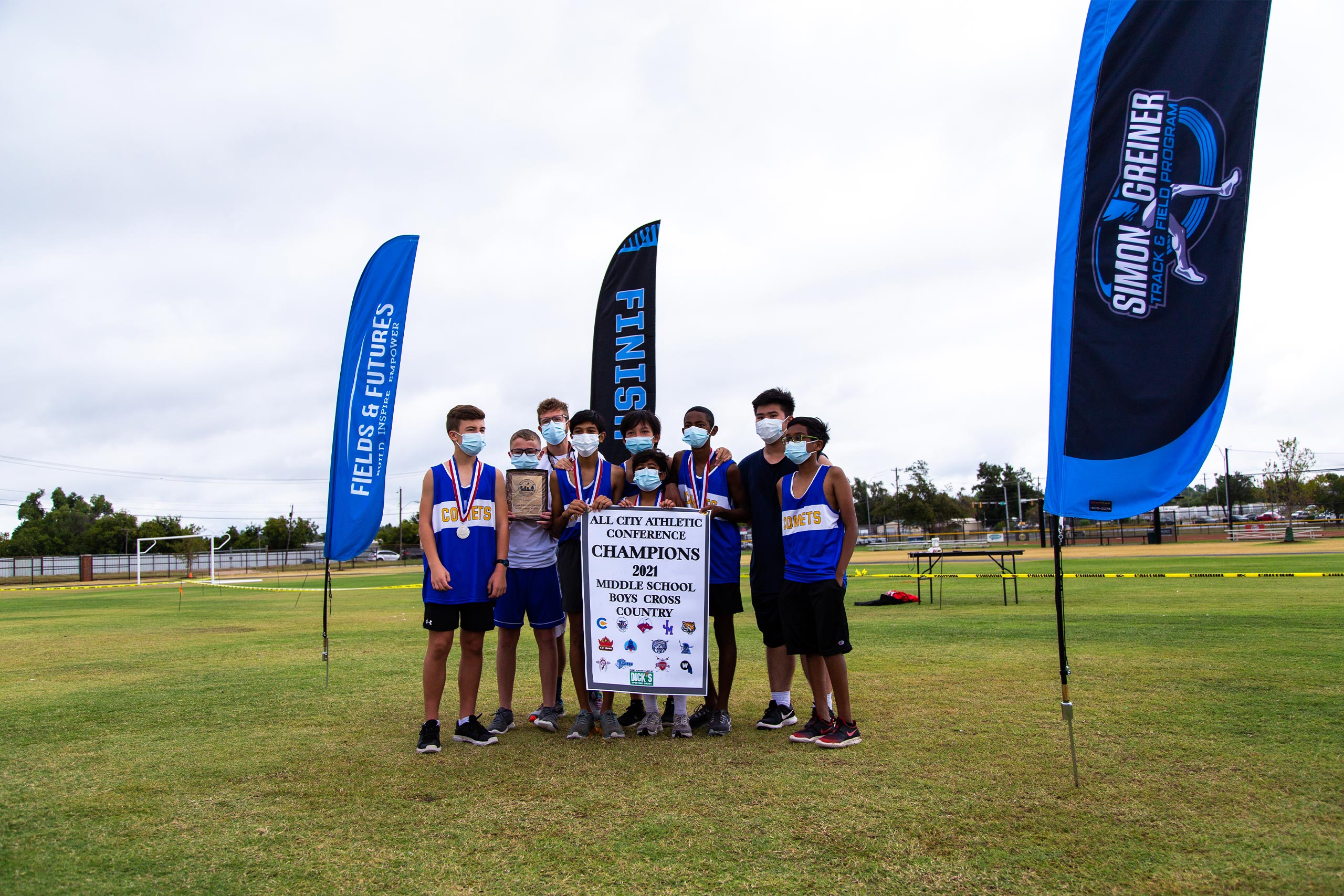 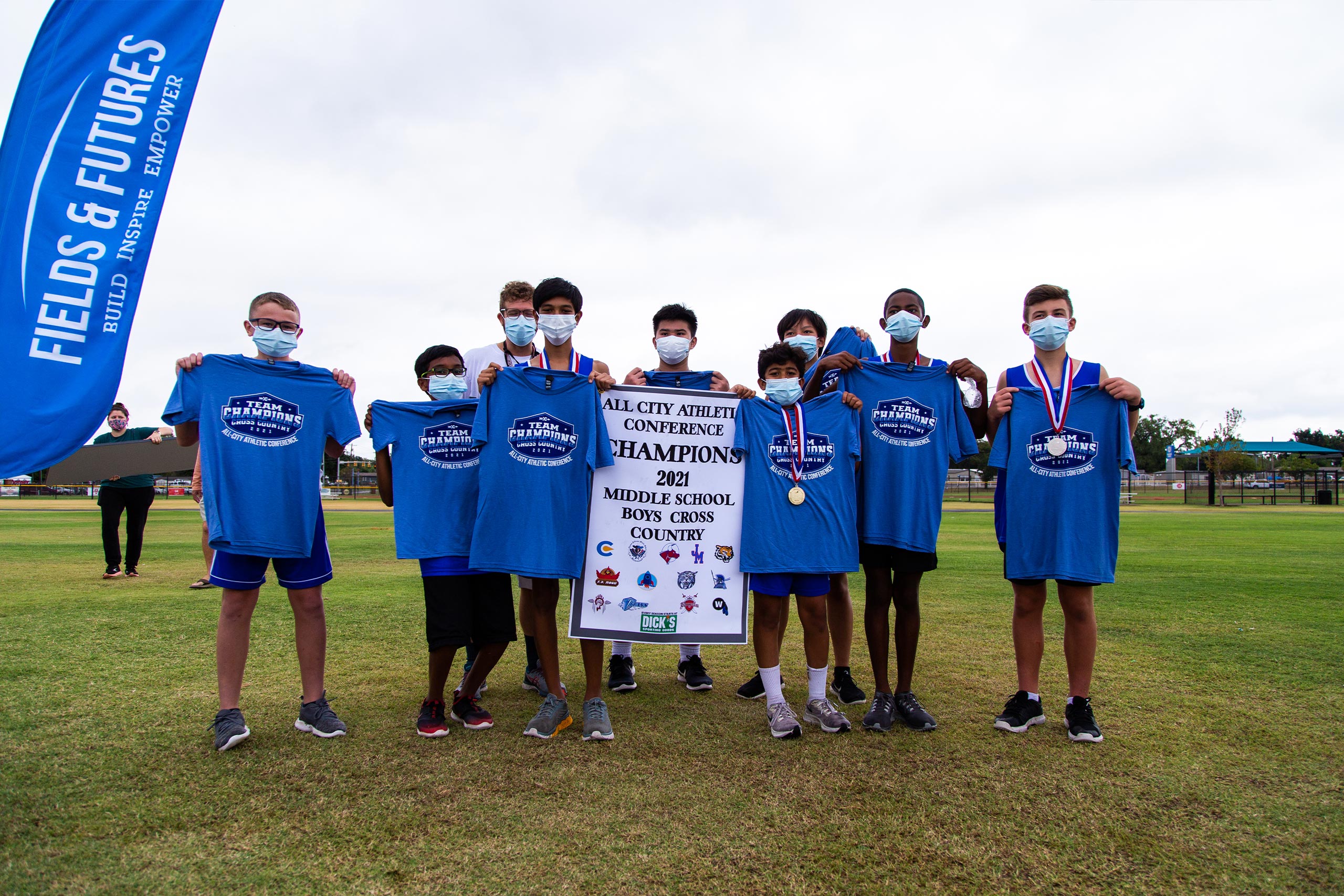 By the time the dust from four varsity and junior varsity races had settled, the Comets from Classen SAS Middle School had claimed both the boys’ and girls’ championship banners. But even though great performances deserve to be recognized, the most important outcomes at the middle school level are participation and a fun environment.

“In middle school cross country, what you really want to see is kids enjoying themselves,” said David Crynes, director of the Simon Greiner Track & Field Program. “It’s less about the X’s and O’s, and more about creating a fun, inviting culture that inspires kids to run.”

Enthusiasm, engagement, and acceptance are what draw middle schoolers to their school’s running programs. And that’s exactly what Crynes saw from the teams, coaches, and the school district at the ACAC Middle School XC Championship.

It’s less about the X’s and O’s, and more about creating a fun, inviting culture that inspires kids to run.

“Todd Dilbeck could have attended any number of district events that morning but he chose to support middle school cross country,” said Crynes. “That level of engagement and support is what it takes to grow the sport and raise the level of competition in high school programs.” 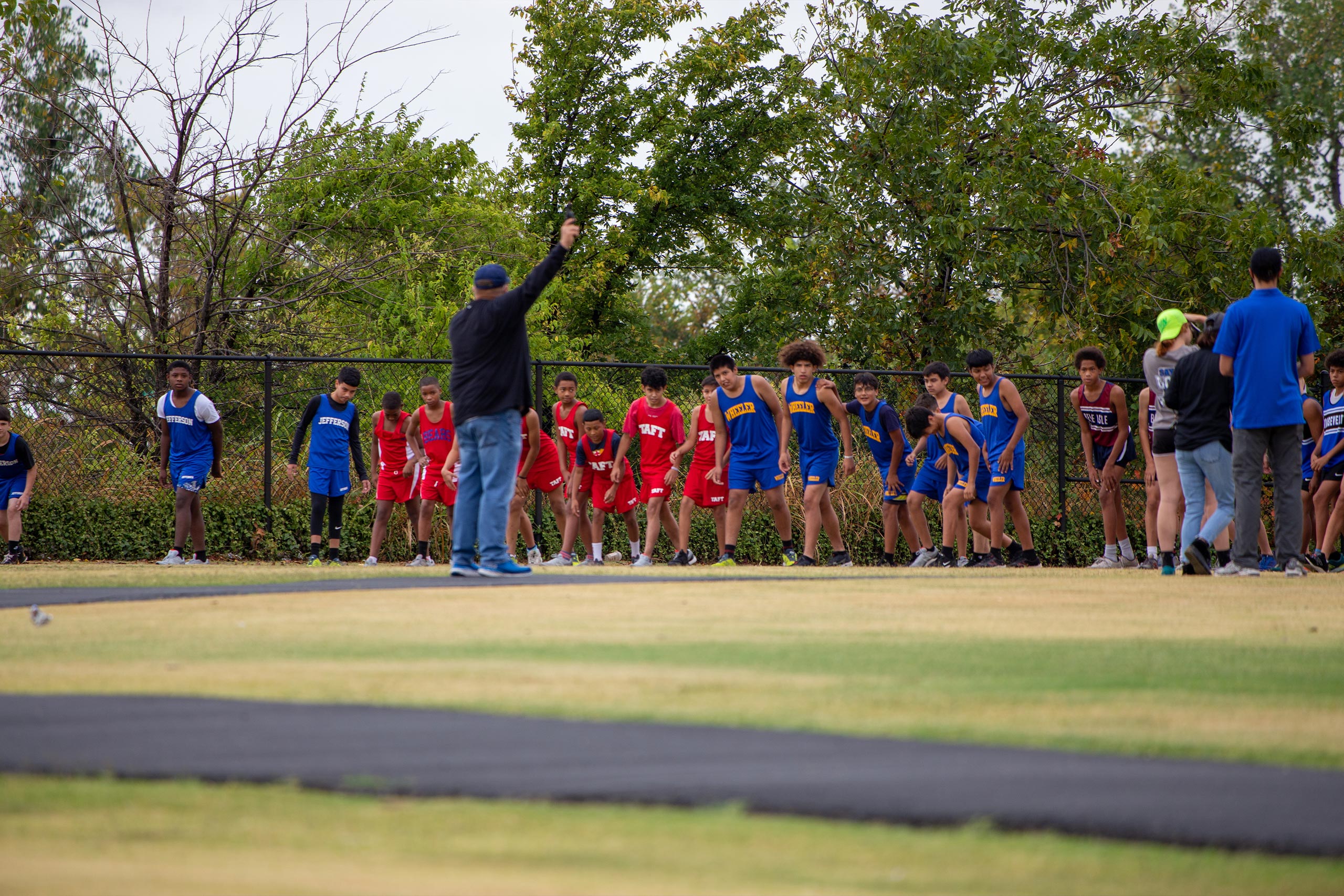 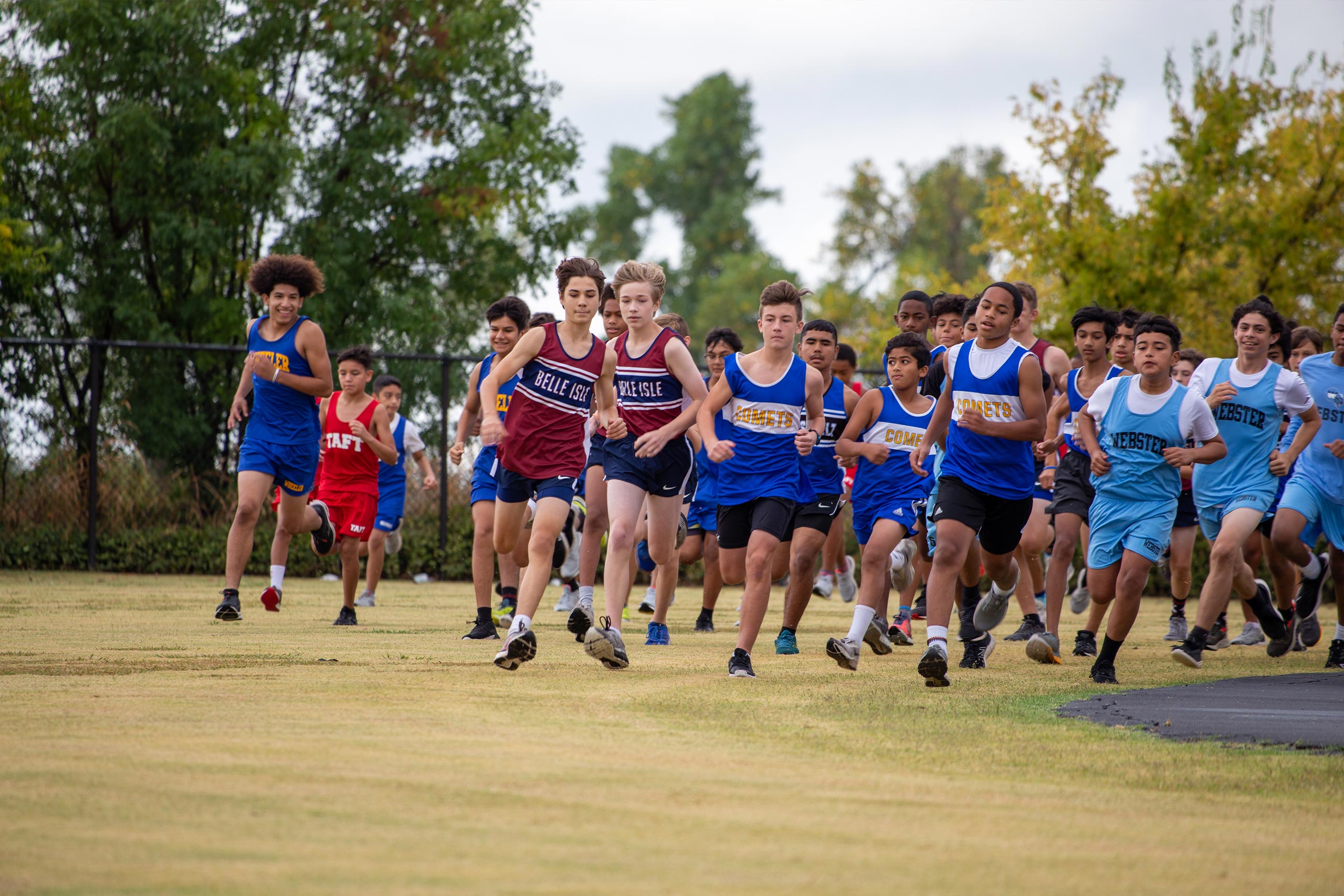 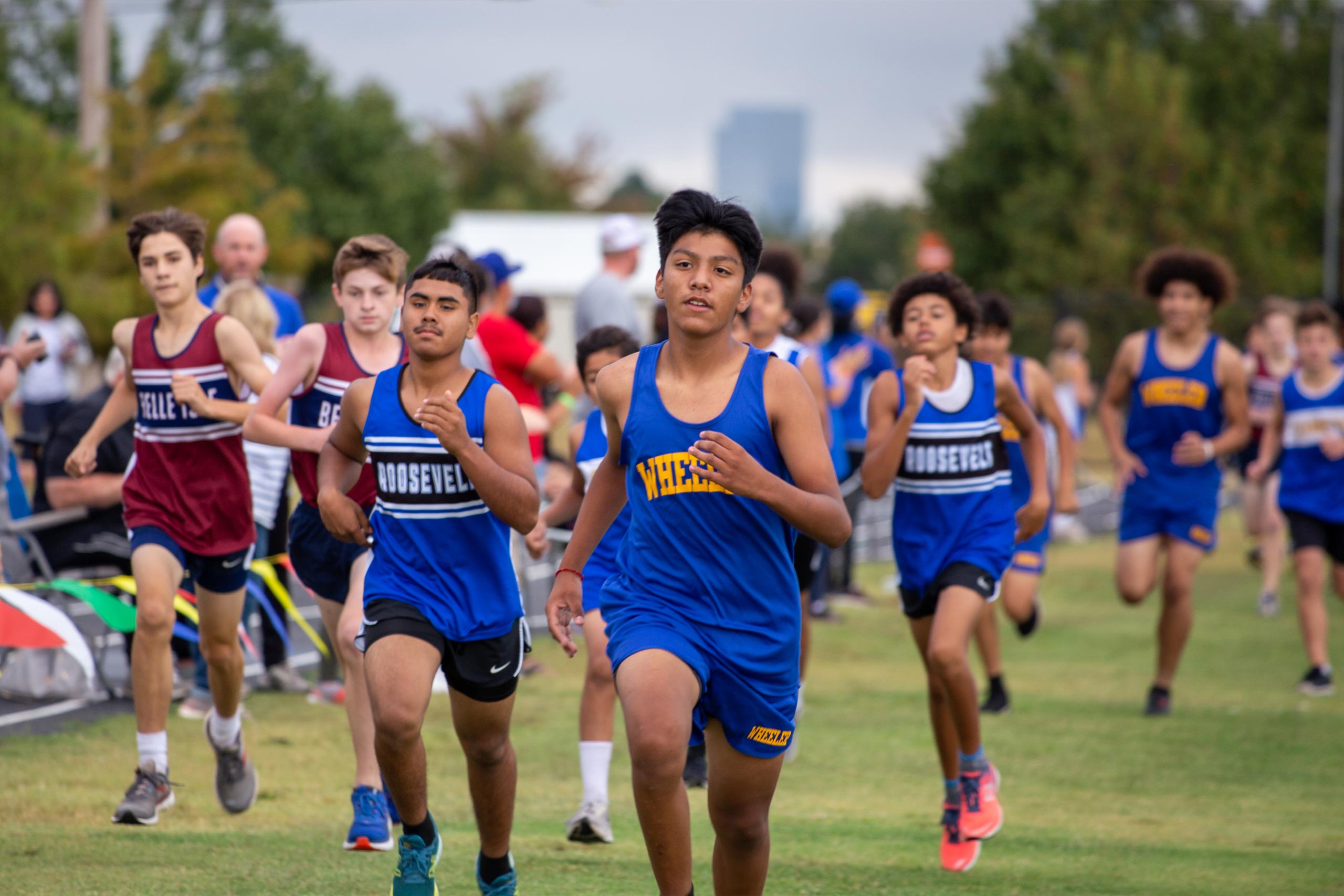 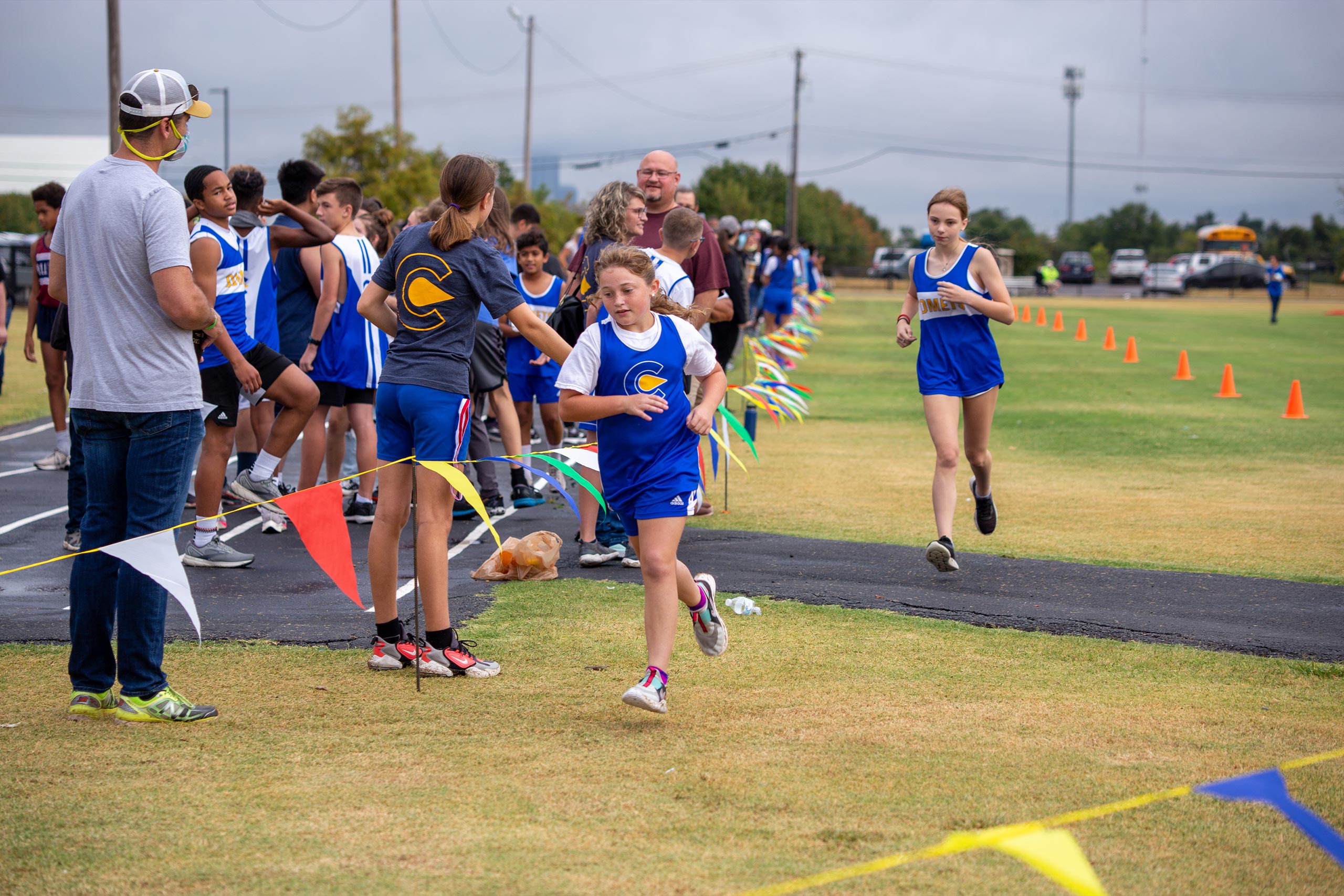 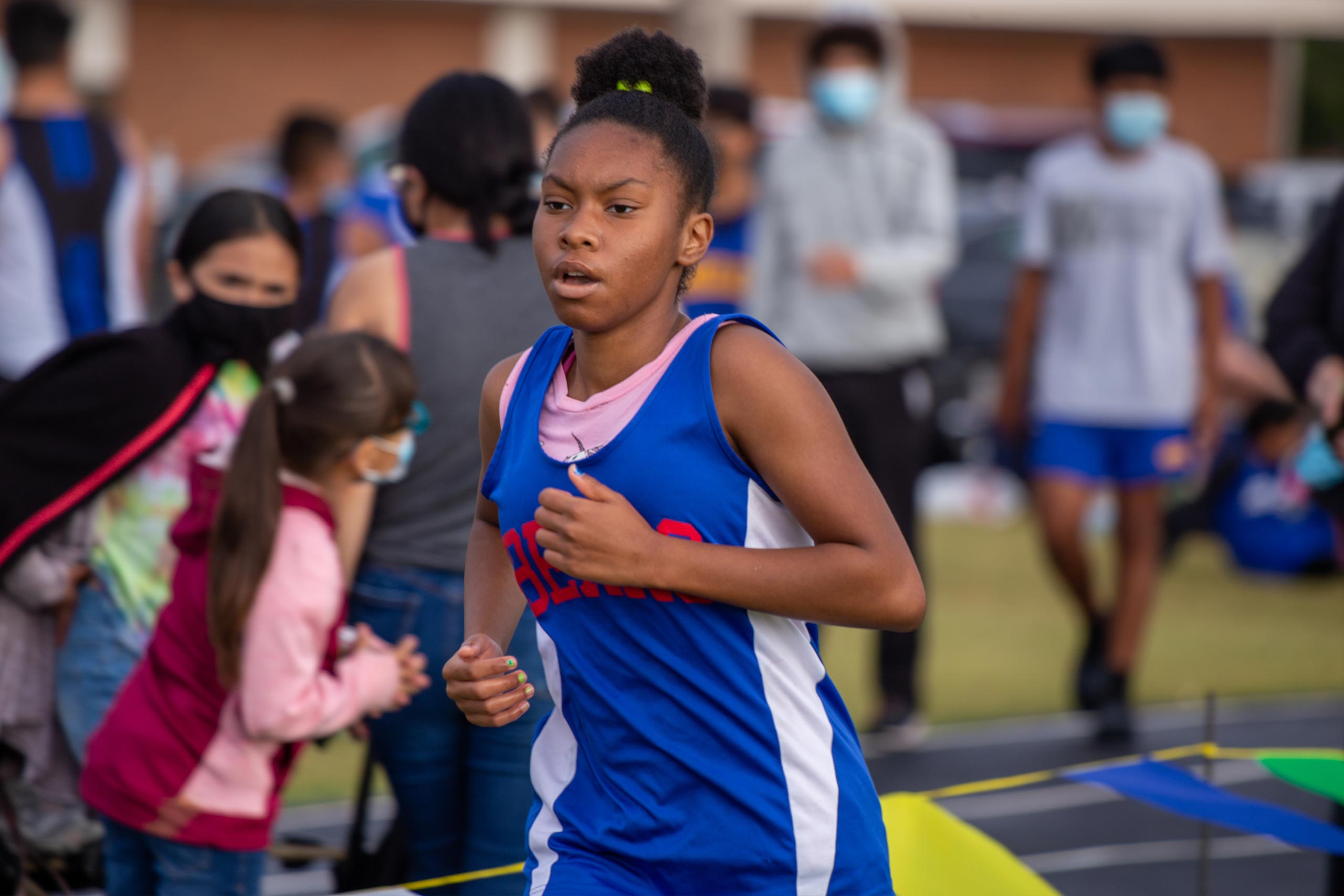 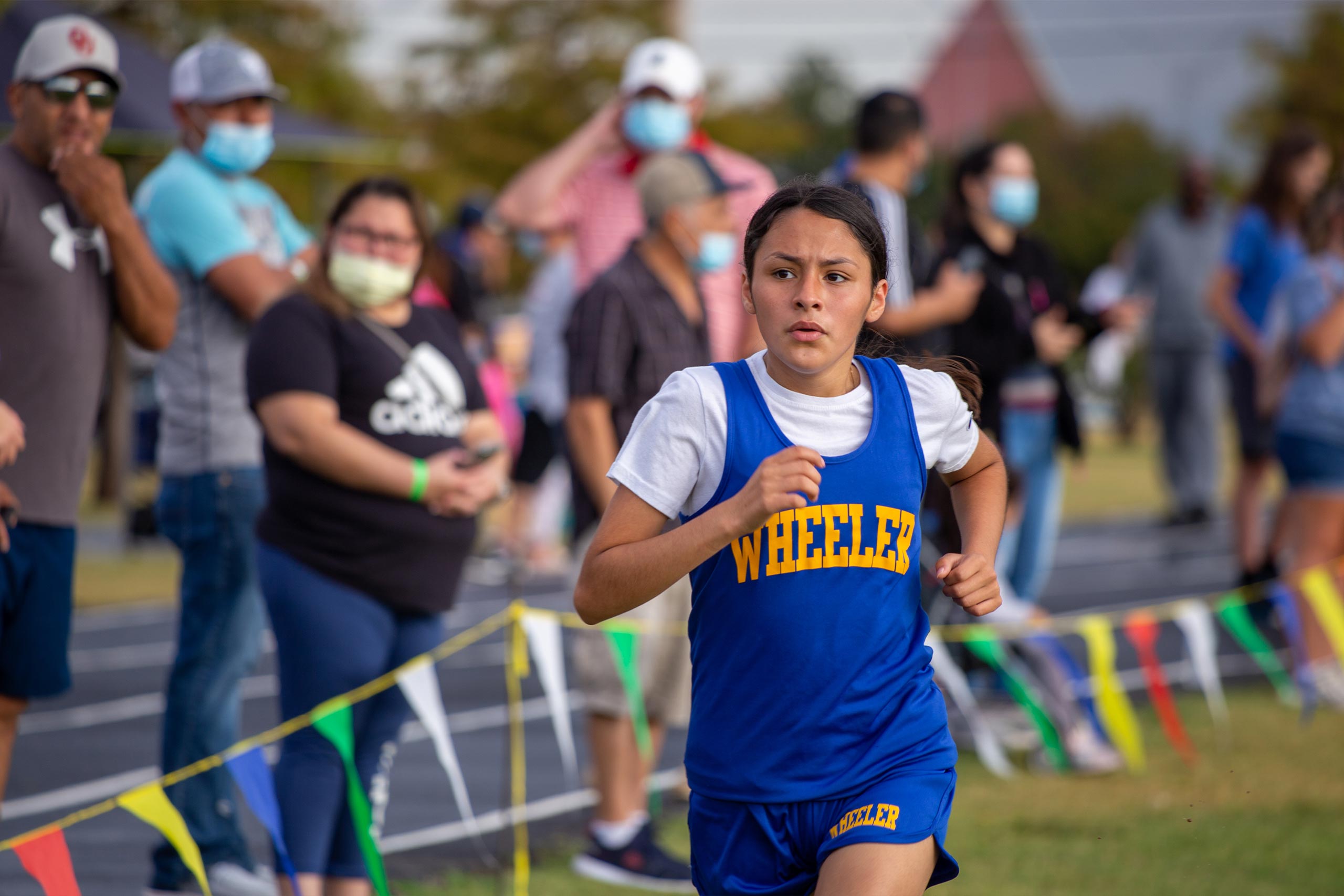 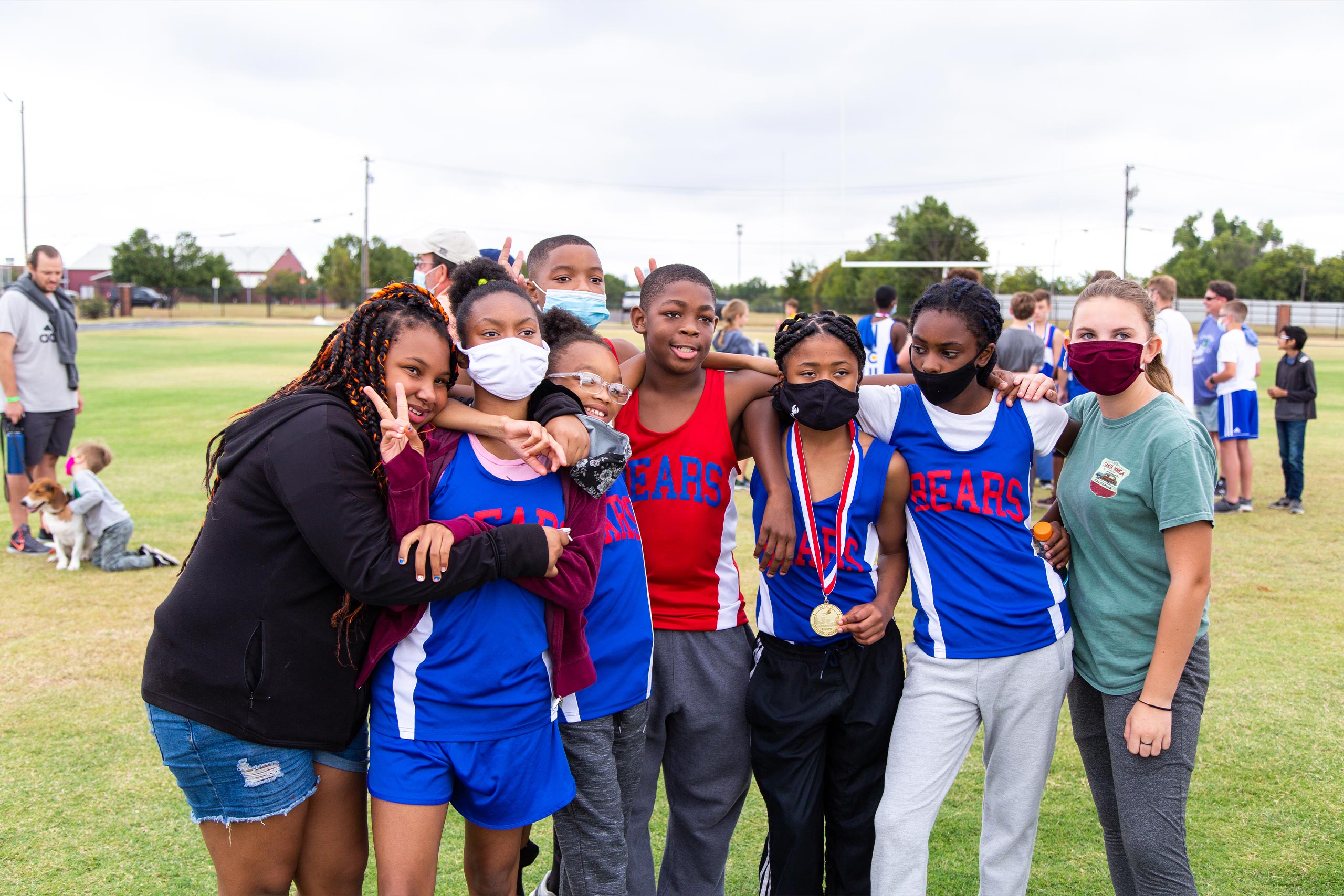 After the races, Crynes presented “Team Champions” t-shirts to the winning boys and girls teams. But for Crynes, the Simon Greiner Program, and Fields & Futures, the meet was more than an opportunity to hand out apparel. It was the culmination of a recalibrated and collaborative effort to enthusiastically support and promote OKCPS cross country and track & field programs. Over the summer and throughout the season, the Simon Greiner Program implemented a running incentive program, developed training plans, hosted a coaches workshop, and provided teams with running shoes.

One of the goals of the Simon Greiner Track & Field Program is to help kids trailblaze life. For 112 middle schoolers, the All-City Athletic Conference Middle School Cross Country Championship was the perfect starting line.

The inaugural OCU Stars Mile Night got off to a perfect start with more than 150 runners from OKCPS and around the state participating in 12 heats. The night was anchored by the Simon Greiner Elite Mile men's and women's races with OCU's Shimales Abebe clocking a 4:07, the fastest time in Oklahoma this year.

END_OF_DOCUMENT_TOKEN_TO_BE_REPLACED

On Thursday, April 21, 2022, we held a community celebration and ribbon-cutting ceremony to introduce the completed Lopez Foods Sports Complex at U.S. Grant High School to the public. In typical Fields & Futures fashion, food, music, and festivities were involved!

END_OF_DOCUMENT_TOKEN_TO_BE_REPLACED

April Is Running Month in OKC

With a full slate of running events stacked up throughout the past month, April could be called Running Month here in OKC. And thanks to the Simon Greiner Track & Field Program, we left our footprints all over it!