His career after baseball has been built on furthering a love for the game.

On Wednesday afternoon, Ripken along with hundreds of students, faculty and alumni gathered at the newly renovated Southeast High School Sports Complex for its grand unveiling.

In partnership with Fields & Futures, the Cal Ripken Sr. Foundation and Oklahoma City Public School Athletics, the new field and electronic scoreboard for baseball and softball were unveiled to the public.

“This is big league,” Ripken said. “This is the same caliber of field that we would’ve gotten to go out there and play on. If you really get excited about the field you are playing on, you start to do really good things all around.”

Southeast became the 22nd OKCPS athletic field to be renovated, and became the first to feature a synthetic turf infield.

Ripken said it was important to him and his family foundation to partner with Fields & Future because its mission of restoring baseball to poorer schools and neighborhoods. It is a mission his father Cal Ripken Sr. would have been all about.

“My dad was a magician at getting kids involved and getting them to look at their potential,” Ripken Jr. said of his father, who passed away 1999. “I think we all understand the power of sport and how sport teaches us a lot of lessons. 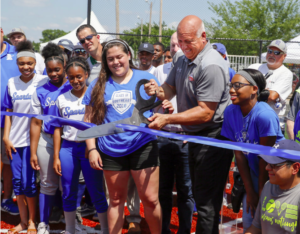