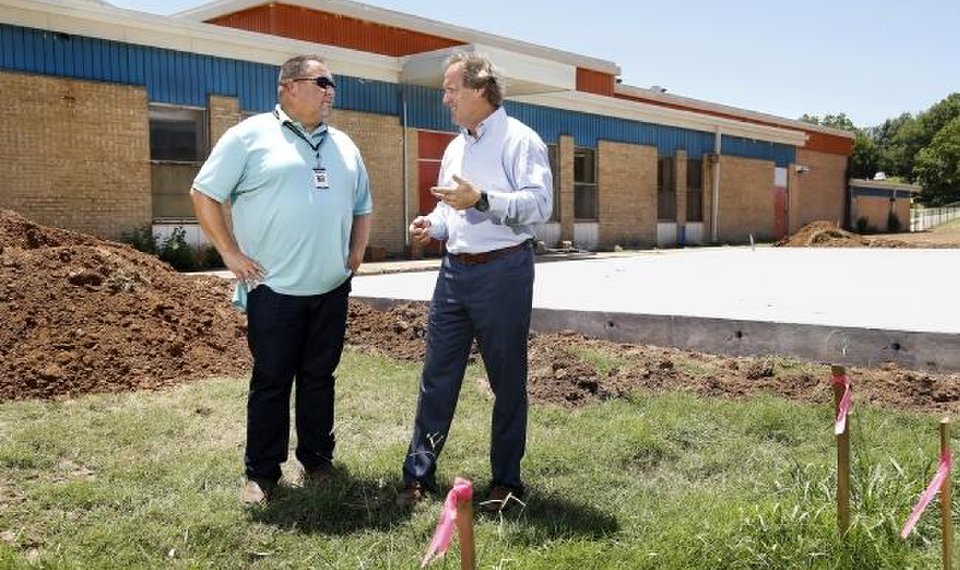 by NURIA MARTINEZ-KEEL on Oklahoman.com

Behind F.D. Moon Middle School sits an empty excavated field and a slab of concrete.

This summer, the nonprofit organization is renovating fields at seven middle schools, all affected by consolidations across the Oklahoma City school district.

Some of the facilities, including F.D. Moon, are former elementary schools reconfigured to serve fifth through eighth grade. With an older age group comes a need for sports programs and on-site athletic facilities, not empty, unmarked fields.

“What we get really excited about is the end result of getting kids on teams and putting coaches in their lives,” McLaughlin said. “They’ve got to get to school. They’ve got to make their grades, stay out of trouble, stay on the team. We get excited about those things.”

The concrete slab behind F.D. Moon will become a futsal pad, where athletes can play a compressed version of soccer that emphasizes footwork and ball control.

Soon, every middle school in the Oklahoma City district will have one, resulting from a Fields & Futures partnership with the U.S. Soccer Foundation, Musco Lighting, 7-Eleven and the Energy Assist Foundation. The cost to install 10 of these “mini pitches” exceeds $500,000, according to a news release from the partnership.

“It doesn’t matter how big you are, how fast you are, how athletic, really,” McLaughlin told The Oklahoman. “Soccer’s the world’s largest sport. It’s also one of the biggest unifying sports there are. It doesn’t matter your color, your race, your size, your age. You can play it. So, we love that about the power of the game.”

A basketball court will occupy the empty space adjacent to F.D. Moon’s future futsal pad. The west side of the lot will become a football and soccer field surrounded by a track. Later this year, construction will begin on a softball field on the far east side of the property, pending funding.

Fields & Futures is in the middle of its most ambitious project since it began upgrading and maintaining Oklahoma City public school fields in 2012.

Heavy rains in May delayed construction progress, so the projects likely will continue into the first semester of the school year, McLaughlin said.

A group of construction companies, corporate partners, the Oklahoma County Board of Commissioners and the district have dedicated resources toward the Fields & Futures initiative. Energy FC contributes $2 of every ticket sold to the organization.

“It’s millions of dollars, and a school doesn’t have millions of dollars to go do that for athletic fields,” district Athletic Director Todd Dilbeck said. “But, with a collaboration of a lot of people along with the schools, it allows us to make Oklahoma City a very special place.”

Fields & Futures’ original goal was to boost sports participation at district schools, McLaughlin said. Then, he learned the impact of athletics ran much deeper.

The survey reported almost all the athletes aspired to go to college, and 80% were more likely to say no to drugs and alcohol.

Three quarters of the girls said playing team sports made them happier.

Students are encouraged to remain academically eligible for sports with a “no pass, no play” policy, said Anderson, a former track athlete and state-championship-winning coach.

“It absolutely builds confidence in every area,” Anderson said. “You have to work hard for that, and you work hard in a classroom. All of those things carry over, and they combine to make a successful student. I do believe that.”