Fulfilling a dream: Fields and Futures’ mission goes beyond sports 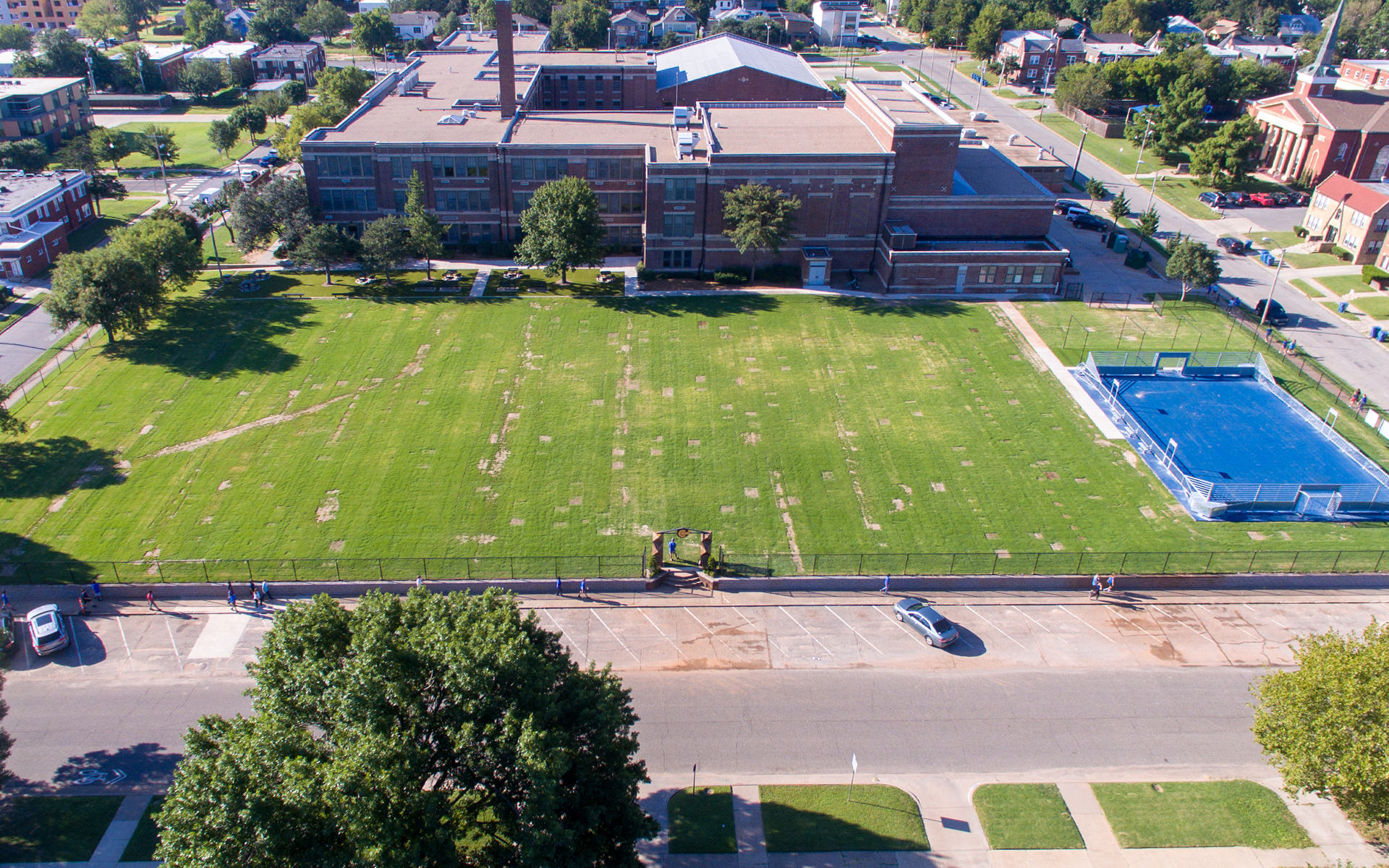 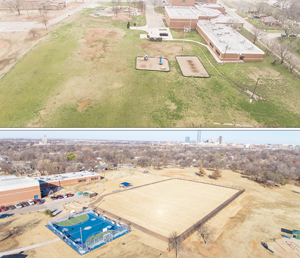 Before-and-after photos of Wheeler Middle School, where irrigated recreation fields were built with funds raised by Fields and Futures, a nonprofit created to help Oklahoma City Public Schools put more students on the path to graduation by growing participation in sports at the middle and high school levels.

OKLAHOMA CITY – Tim and Liz McLaughlin knew firsthand the benefits of playing on team sports from their own youth and through their children’s experiences, but they weren’t prepared to see how few Oklahoma City children had that same opportunity.

The McLaughlins were early supporters and donors of the Wes Welker Foundation and were invited to join a group tour of OKCPS athletic facilities in 2011.

Native Oklahomans, the McLaughlins were shocked at how bad the athletic fields in Oklahoma City’s public schools were.

“We were on a bus tour of the schools with the Wes Welker Foundation to look at all the OKCPS sites for a grant for sports equipment,” Tim McLaughlin said. “We saw the fields and it was pretty pitiful. The fields were awful. What are we telling our kids with these fields? We are telling them that they don’t matter. It was very disappointing.”

Because of their understanding of sports as a motivator to improve attendance and grades to stay on a team, they knew OKCPS students were missing a potentially life-changing opportunity.

From that disappointment came a dream and a mission to create safe and quality athletic fields at all of Oklahoma City’s public schools.

The best way to accomplish that goal was to rebuild and maintain all the athletic fields across the entire district.

Now, nearly eight years later, Fields and Futures has done just that. Thirty fields have been completed, with four more funded. Only nine fields remain to be rebuilt after the funded four are completed.

While it started with a revelation and a dream, the success of Fields and Futures took more than just one couple’s ambition. It took a team.

After seeing the state of the decrepit fields in 2011, the McLaughlins just couldn’t shake the idea that something had to be done.

“The school funding mechanism was so up and down, and the schools had to make hard choices,” he said. “If it came down between getting new computers for a classroom or maintaining an athletic field, that was a hard choice.”

Still, the McLaughlins knew that students who participated in sports had better grades, better discipline and higher graduation rates. In lower-income neighborhoods, many children were not given the opportunity to participate in any kind of activity.

As a “litmus test,” the McLaughlins decided to rebuild the athletic fields at Jefferson Middle School themselves to see if it could be accomplished. Then-OKCPS Athletic Director Keith Sinor connected with the McLaughlins and shared their goals, said Dot Rhyne, development director for Fields and Futures.

“Keith told Tim in 2011 they needed to rebuild their athletic fields to have any hope of growing student participation in sports. Tim and Liz shared those conversations with their good friend Tommy Noble, co-owner of Cimarron Construction, and by the end of 2012, they had rebuilt three fields at Jefferson Middle School – football/soccer, baseball, softball,” said Rhyne. “Once they saw the immediate impact of that work, they made the decision to go all in and do all of them.” 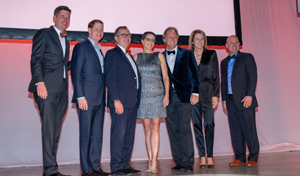 Almost overnight, the effects were undeniable. Students began participating in sports again and the school was able to host home games that attracted hundreds of parents and spectators.

“That’s when we knew we were on to something,” McLaughlin said. “But to rebuild all the athletic fields in the district was a big undertaking and we couldn’t do it alone.”

The McLaughlins formed Fields and Futures, a 501(c)3, and reached out to nonprofits, foundations, grantmakers and donors with the dream to improve Oklahoma City Public Schools’ sports programs, and in turn, help the children improve as well.

“When you show how children improve when they are involved in sports, it makes it an easy sell,” said McLaughlin. “We have some amazing partners.”

Cimarron Construction acts as general contractor for all projects with significant cost savings while the Wes Welker Foundation donates field equipment to every F&F project. Cleats for Kids provides individual equipment and gear for children who may not have basic resources to compete; the OKC Police Athletic League created a fifth-sixth grade youth league in 2015 with help from OKC Parks to get more kids involved at a younger age; and Pathway to Greatness allowed that league to roll into all OKCPS middle schools.

Local donors and other supporters also flocked to the dream to rebuild all of the district’s athletic fields in 10 years and create endowments to maintain them as well.

Senior athletes had an average of 10 more days of school attendance than non-athletes and had a higher grade point average. The graduation rate for Oklahoma City Public Schools seniors who play sports ranked at 99%.

“One of the coaches said before the football field was rebuilt, his football season would end before the season because so many kids dropped out,” said McLaughlin. “Now, he has over 100 kids and he was able to raise the grades of his team. In order to remain on the team, kids have to make a certain grade. If they make a D, then they are suspended until they can raise that grade up.”

Other studies show that exercise helps to increase blood flow to the brain and build more connections between nerves, which can benefit creativity, enhance memory and develop problem-solving skills.

Fields and Futures conducted its “Bases Loaded” Sports Impact Survey of Northwest Classen High School Athletics for 2018-19 and discovered that playing team sports had a positive effect on not only the body, but the mind and soul as well. When playing team sports, 81% of athletes consumed fewer than two hours of TV, video games, or digital media daily, and 68% of males said it was easier to make friends who were positive influences.

Physically, 91% of student-athletes met or exceeded health guidelines for weekly, intense exercise, and two out of three student-athletes were more motivated to eat healthier and exercise on their own.

Even more telling, 68% of athletes were more motivated to say no to drugs, alcohol, and tobacco when playing team sports.

In Oklahoma City, the most dramatic results of the new fields occurred in areas of the city that had income disparity levels.

“We wanted to know why it worked so well in the more challenging parts of the city,” McLaughlin said. “It turns out that the sports programs and the fields were providing something that they may not be getting at home. We had so many quotes from kids saying ‘My team is my family. I work hard for my family,’ or ‘My coach is making me a better man or woman.’ Not only are we putting sports in their life, but a good adult too. It’s pretty remarkable.”

Since starting the programs, the schools with the active fields have reported higher grades and more students are enrolled in AP and concurrent classes. More attempts have been made on the SAT and ACT tests as well.

“Hopefully, the sports results in better grades, but it goes so much deeper than that,” McLaughlin said. “And it’s not just a school story or an Oklahoma City Public Schools story. It’s a city story. Every penny we raise goes into projects. We have a grant that pays for the staff and marketing.”

Once a field is built, an endowment is also put in place to ensure continued maintenance. Eventually, McLaughlin said, there will be no more fields to build.

“Fields & Futures made a promise to donors early on that we will maintain everything we build. Our $10 million perpetual field maintenance endowment will ensure all new outdoor fields, tracks and courts will be maintained long into the future,” said Rhyne. “F&F works with OKCP Athletics to maximize all available maintenance resources. A driving belief is kids will belong to something. We want it to be something good.”

In 2020, Fields and Futures’ goals include a possible partnership and memorandum of understanding with the city of Oklahoma City that would allow district teams to use park facilities for free and park programs to use school assets at no cost as well.

“That will help get rid of the cost of renting fields and facilities and we can start offering summer programming as well,” McLaughlin said.

Fields and Futures is also in discussions with the YMCA to provide a full slate of sports programming for third and fourth graders that goes hand in hand with the Police Athletic League, which offers sports for fifth and sixth graders.

“The schools take over for seventh through 12th, and if the parks offer a summer program, then we will be able to offer sports programming throughout the entire year,” McLaughlin said.

In addition, Fields and Futures will offer a soccer league for third and fourth graders at eight pilot schools this spring.

“This really would not have been possible if the school district wasn’t so great to work with,” said McLaughlin. “It’s like stone soup. You throw in a bunch of people who all add something to the mix and it comes out pretty tasty.”